New Hampshire has a number of long-outstanding missing-person “cold cases.” This one goes back to 1980.

I subjected it to my “Train to Nowhere” missing-person spread, using the Tabula Mundi Colores Arcus deck with reversals. I chose the Princess of Disks as the Significator.

The Significator came up at the bottom of the ninth pack in the “train;” the description of this position is “Kept under constant surveillance,” and it was intended for the “chained to the bed” kind of coercive detention (aka “enslavement”) that seems disturbingly more common in recent times. However, in this instance it may indicate that someone has been monitoring her whereabouts (or resting place)  and keeping close tabs on the investigation for the last 38 years. 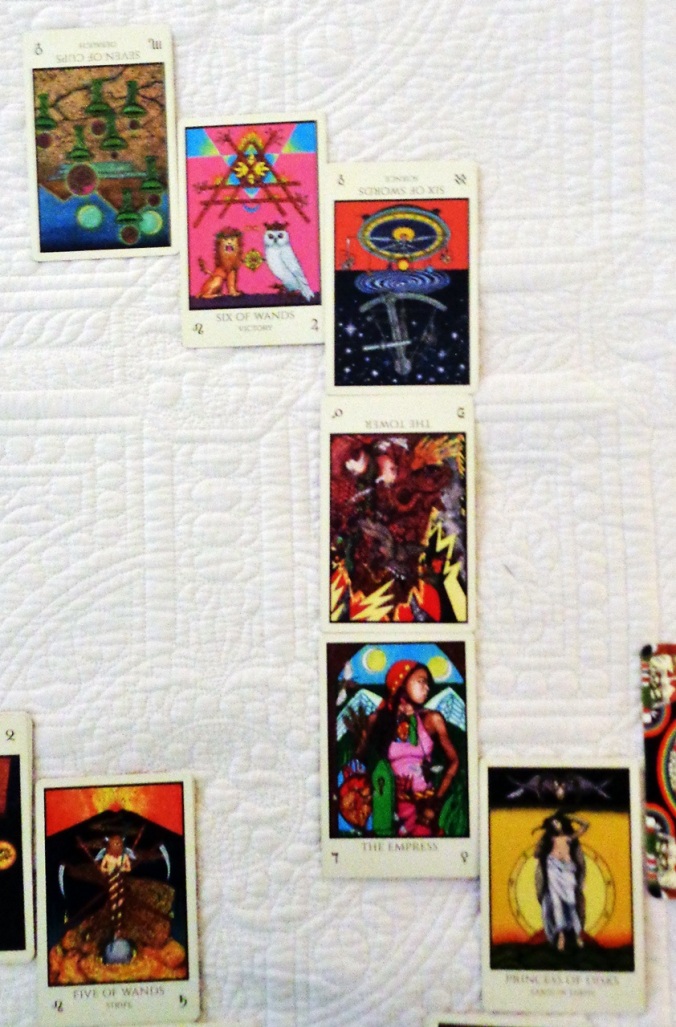 If Rachel is in fact deceased, the upright Significator indicates that she probably isn’t buried in some remote location, and the Empress immediately adjacent makes me think whomever was responsible for her disappearance has been watching developments carefully and is comfortable that the case will never be solved. The word “teflon” comes to mind, someone to whom nothing ever sticks.

The reversed 7 of Cups on the top of the pile suggests deception as a possible initiator in this scenario, with the 6 of Wands next in line looking like something attractive may have been dangled in front of her to draw her into the web.

The 6 of Swords reversed could mean that she was taken somewhere against her will (the random notion “at knife-point” comes to mind). Her walk home was interrupted by something unplanned.

The Tower reversed implies that whatever was intended got out of hand, and catastrophe may have come to her as a result. The three reversed cards here allude to clandestine events.

The Empress hints at a cover-up, just carrying on blithely as if nothing happened. This card is the key to unraveling the mystery, but she is very self-possessed and not likely to waver in protecting her interests. The investigators have been focusing on three men, but I wonder whether they have considered a well-situated, pleasant woman of Rachel’s acquaintance who may have played a part, maybe someone who gave her a “ride to nowhere.”