I’m probably going to disappoint the Trump-haters again, but I try to “just read the cards” with these sociopolitical readings and not grind any axes. As a “third-party” (Libertarian) sympathizer who subscribes to the maxim “Government is not the solution, it’s the problem,” I like to put US politics under the tarot microscope. There is nobody I can think of who has more polarized (and polarizing) friends and enemies than Donald Trump. To test the “Friends and Enemies” multi-person conflict spread I posted recently, I decided to look at the possible fate of Trump’s presidency as it is likely to be influenced by his associations. I used my favorite sociopolitical deck, Brian Williams’ Post-Modern (PoMo) Tarot, with reversals as directed in the spread guidance. I should note that I don’t buy Williams’ assumption that Guns are Air and TVs are Fire; gunpowder is clearly “fiery” and – to use pre-satellite terminology – broadcast  frequencies pervade the “airwaves.” 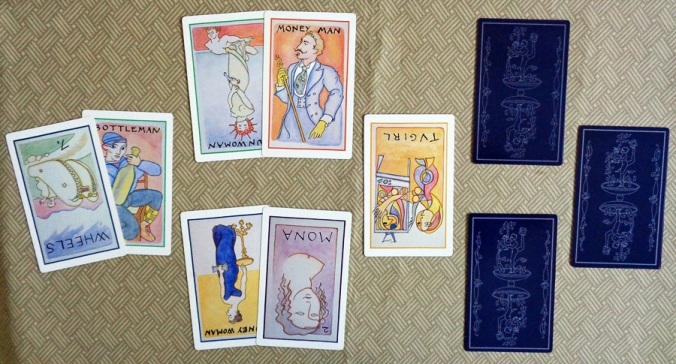 Because the Significator (TV Girl reversed) was facing toward the left, I examined the more clandestine side of the situation. Therefore, I turned over the “revealed” cards on the right to prevent confusion since they won’t be read; at this point, what is hidden is of more significance than what is out in the open.

TV Girl reversed conveys Trump’s ongoing skirmishes with the mostly-young media press corps. The reversal suggests that “insinuation” rather than “elucidation” plays a major role in the relationship; it also implies that Trump has been poorly served by the exposure. The “tactics” positions pit Gun Woman (Queen of Wands reversed) in the “Unknown Opponents” position against Money Woman (Queen of Pentacles reversed) in the “Unknown Supporters” position. These cards indicate that the “feminine contribution” to Trump’s re-election chances is uncertain at this point and may be under-counted in the polls. Gun Woman signifies the “liberal militant” and Money Woman the “moneyed elite.” There are no surprises there; what may be underestimated is the depth of passion on both sides. As far as “execution” of the tactics, Gun Woman has Money Man (“Mr. Deep Pockets”) in her corner while Money Woman is riding on the “Great White Hope,” Mona (aka the High Priestess) reversed, who is playing things close to the vest.

The “strategies” position holds “Bottle Man” (King of Cups) as the underlying “persona” of the “flanking action” scenario. This makes me think of the Middle-American “Budweiser Brigade” (my own term) made up of Hilary Clinton’s “deplorables” that were the backbone of Trump’s candidacy during the 2016 election. As the little girl said in Poltergeist, “They’re baaaack!” The “execution” card is “Wheels” (the Chariot) reversed. The image shows what looks like a World War I tank, and reversal suggests that it is a juggernaut flying under the radar. The implication is of a “secret weapon.” However, I sometimes interpret the Chariot reversed as “the wheels fell off,” immobilizing the car. If Trump’s rural base deserts him that could well happen, but it seems like a long-shot since Bottle Man is entrenched. The Chariot is a card of triumph  in “real” as opposed to ideological terms, and the reversal suggests that, rather than being denied, it will be delivered in unexpected ways; maybe there will be some kind of “back-door” outcome like the “hanging chad” controversy, this time involving voter fraud or election meddling. I don’t see Justice or Judgement here, so it is unlikely to reach the Supreme Court.

Regarding elemental dignities between the Significator and the tactics-and-strategies subsets, TV Girl is strongly attuned to Gun Woman and at odds with Money Woman. However, Money Man is calling the shots from the “Unknown Opponents” side, which cramps TV Girl’s freewheeling style. Mona is not overtly hostile to TV Girl but doesn’t really see any good reason to engage with her. The strategy cards are not exactly on her wavelength either. In short, she feels frustrated in this war.

The upshot is that Trump’s mainstream-media foes may be playing a losing hand, despite what TV Girl wants us to believe. While the “Unknown Opponents” may have money and passion going for them, the “Unknown Supporters” have “power in reserve” (plus the formidable reassurance of the incumbency as demonstrated by the reversed Chariot, which “isn’t going anywhere”), as well as the “mystique” (inscrutability and unpredictability) of the High Priestess. The “kingmakers” of the media establishment may be headed for another Waterloo.