This spread is named in honor of a French-Canadian acquaintance who always said “Let me face it” instead of the rhetorical “Let’s face it” when making a point. It uses the facing of the court cards to indicate which of four rows of face-down cards to select for the reading. The court cards are separated from the deck, and the rest of the cards are shuffled and dealt face-down, in any order, into the twenty positions of the layout. The court cards are then shuffled and dealt face-up, top-to-bottom, into the left-hand column until a right-facing court card appears. This card is the “pointer” that identifies the five-card line to be read for the question or topic area. These cards are intended to represent the most accurate expression of ways in which the characteristics, attitudes and behaviors of the highlighted court card can be leveraged (or could emerge unbidden) in any actions or initiatives the querent might be advised or compelled to take.

Recognizing that not all court cards will have a distinct left-or-right orientation of its central figure, other distinguishing features can be used; these include posture and gesture (aka “body language”), dominant-hand-held objects (like the sword in the right hand of the RWS King of Swords, who faces straight out), the flow of the landscape (downhill implies movement in that direction) and anything else that suggests obvious directionality. Reversals may be used in this spread for both the main array and the sixteen court cards (which can rotate the customary facing). 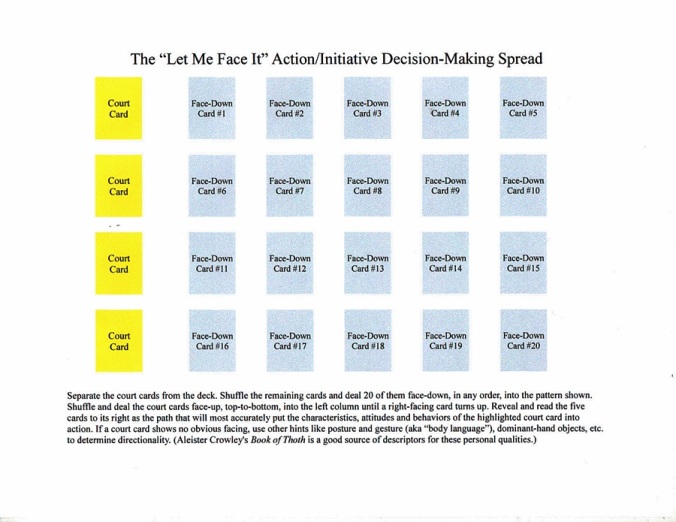