My birthday is on the Summer Solstice, and every year I do a Grand Tableau to look at the year ahead. This is Lynn Boyle’s Heloise Lenormand, my current favorite. 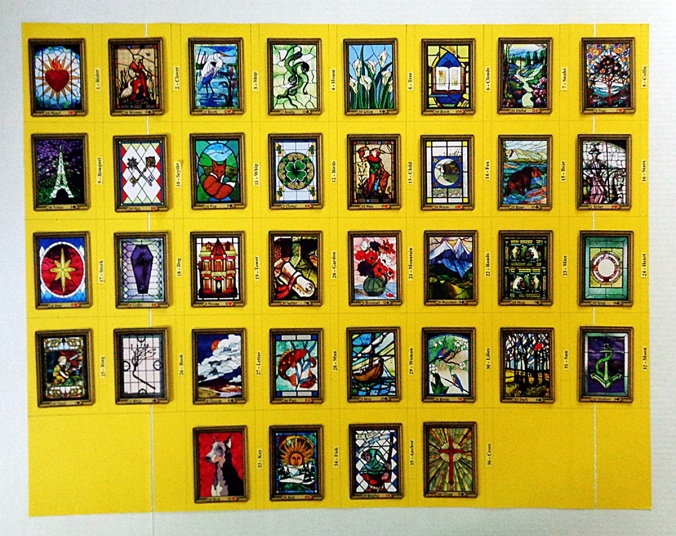 Except for the Fox, the Man’s row is filled with nothing worse than “neutral” cards. The Fox suggests the worm at the core of the apple. The series Clover-Man-Moon-Bear describes “a lucky man of worthy repute,” making me think I could make good on my initiative to get a divination practice going in my new location.  The Rider at the end mirroring the Tower could mean that I will have to connect with a larger organization in this pursuit, which the Key following the Tower seems to be endorsing. I will need to watch out for that Fox, which could indicate manipulative tendencies disguised as good will. The Moon is in the house of Fox and also knights to the Snake, which could reflect that my reputation is vulnerable to being undermined. Since Rider knights to Book and Book to Clover, my publishing portfolio (The Cartomancer; the American Tarot Association’s periodicals; a planned book of tarot spreads) could continue to grow as well. However, Book is in the house of Clouds, showing that I should be very aware of copyright infringement exposure and not be overly sanguine about any assurances regarding it (Rider in house of Stars). The majority of the cards in this spread are below the Man, promising that most circumstances over the term of this reading will be subject to my influence and control.

The first three cards (the message for the querent) are the Heart, the Woman and the Storks, giving me the idea that affairs of the heart involving a woman and the opportunity for positive change are the keynotes for the year ahead. This seems to bode well for my current relationship, at least as far as it goes. But the next card gives me pause: the Snake as “the Other Woman,” and also as “complications.” The “old guy” (Lilies) could be lured into a secret situation (Book) that creates a parting (Crossroads) from long-standing traditional virtues (Tree in the house of Coffin, mirroring Heart: a currently happy situation “dying at the root?”). The Snake is in the house of House, portraying “mischief at home.” But I’m an honorable man, so I don’t see any of that forthcoming.

The four corners (Heart-Tree-Anchor-Child) suggest a renewal of long-held and thoroughly entrenched romantic values. The Child knighting to the Key, the House and the Dog doesn’t seem to offer any incentive or opportunity to upset this arrangement. Note that Man is in the house of Child, implying innocence of any such motives.

But the Man’s column reinforces the idea of risk regarding outside interests. The “old guy” (Lilies + Man)  is tempted (Bouquet, knighting to Snake) to move forward with some venture (Ship) that leads him to the chopping-block (Scythe). Again, an unlikely scenario but not unheard of in the annals of human relations. The Bouquet also knights to the Sun and the Cross: what may look like an attractive fortuity would wind up posing an onerous burden. Bouquet sits directly below Man, indicating that the matter rests entirely in my hands.

On the diagonal, the Man sits between the Snake and the Mountain in one direction, and between the Letter and the Book in the other. The first series shows that the blandishments of the Snake would most likely go nowhere, while the second one looks like some kind of clandestine communication that might be misconstrued as an invitation (Cloud precedes Letter on the diagonal, while Clouds also knights to Bouquet). “Receiving mixed signals” comes to mind.

The Man’s knighting arrays offer a miscellany of conflicting impressions. It knights to Storks and Crossroads above, suggesting that a chance to pursue positive change will be visited upon me. Below, the knighting of Man to House, Mice, Fish and Birds all point to worries and stress over the home environment and disposable income. The latter would seem to be in the most sensitive condition, since Fish also knights to Coffin, Mountain and Cross; it doesn’t look like a good year for extravagant expenditures.

The last four cards (the “destiny” line) are also cautionary. Dog + Sun seem above reproach as far as trustworthy intentions go, but Scythe + Cross foreshadow being undercut by fate. Dog in the house of Key and Sun in the house of Fish are both highly encouraging, indicating that I may get some powerful assistance in my business start-up aspirations (Dog knights to both Child and Ship), but Scythe in the house of Anchor conveys being “cut loose from my moorings.” The knighting arrays Scythe-Clouds-Park and Bouquet-Clouds-Park combine to imply sharply curtailed public awareness of and access to what I can offer. To top it off, Cross in the house of Cross makes hardship of some kind seem inevitable. It may take a dramatic shift in perspective to overcome my inertia.