The 3 of Coins is one of the TdM cards that display a “womb-like” arrangement of foliage  enclosing a suit emblem. Because the foliage appears to be encircling the emblem in a protective and nurturing  way, the implication is that of gestation of the “seed” principle of the suit. The other “incubator” cards in the Hadar TdM and other Conver-based decks are the 3 of Cups; the 5 of Cups; the 7 of Cups; the 5 of Coins; the 7 of Coins and the 9 of Coins – that includes most of the odd-numbered pip cards in those suits, which all exhibit an asymmetrical “odd-even” layout; the ambiguous 8 and 9 of Cups are a special case I’ll cover in other posts. Odd-numbered cards are said to be active and unbalanced, and are therefore seeking to regain their equilibrium. Empowering the “odd man out” by giving it symbolic birth and thereby unleashing its potency as an agent for change is a step in the right direction. The designs range from sealed cells, as in the 5 and 7 of Coins, to those like the 3 of Cups that are obviously in the throes of parturition. 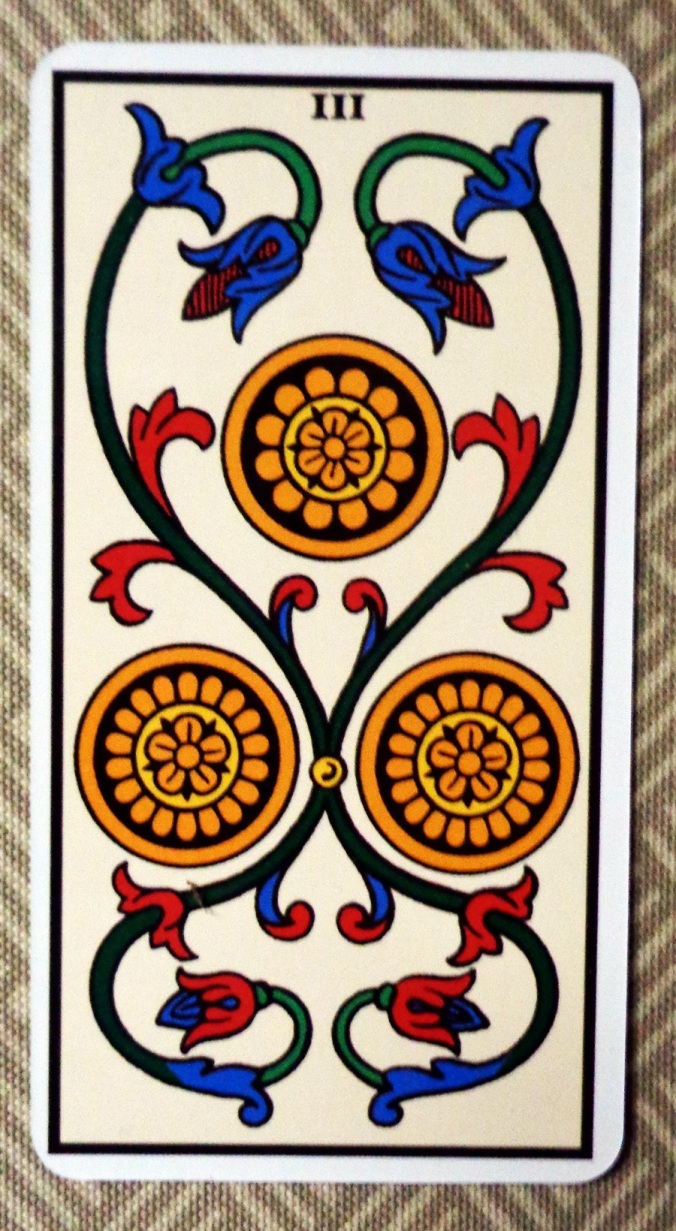 While it might be assumed that all of the Swords pip cards belong in this group due to the labial contours of their central images, I think of those more as “thought balloons” floating the germ of an idea than as cradles of procreative fervor; in those cards with interior swords, the burgeoning idea is single-pointed and emphatic, like an exclamation point, while in those holding flowers the focus is less assertive and might be seen as a thoughtful meditation on the purpose of the idea rather than as a bold statement of intent. There is no navel-gazing among the pips of the suit of Wands; they’re all “outies” that encourage no wool-gathering.

All of the Threes convey the idea of the cooperation of the Father (1) and the Mother (2) in fostering the Child (1 + 2 = 3), and in the 3 of Coins that which is being nurtured and advanced is a production plan. The RWS 3 of Pentacles makes this abundantly clear. It shows what appears to be an architect discussing a blueprint with a craftsman while the clergyman/client looks on impassively.  This scene brings to mind the business maxim “Plan the work and work the plan.” In the 3 of Coins, the “womb” is narrower and firmer than its counterpart in the squatter, more distended 3 of Cups, suggesting an earlier stage of gestation. In the former the embryo is still snugly embedded, while in the latter dilation has commenced in preparation for birth. The chromosomes are still sorting themselves out in the 3 of Coins, reinforcing the idea of a  plan under development and not the harbinger of an imminent event.

The Thoth 3 of Disks (another recognizable TdM clone) cuts right to the chase, presenting itself as “Work,” but I think that’s jumping the gun a bit with its TdM ancestor. An “appetite for work” or “a strong work ethic” would probably be closer to the truth since there is a sense in the 3 of Coins of being prepared in the event the opportunity arises, but there is not yet an overwhelming internal push in that direction; the birth of that desire is still pending. Practical applications within which the constructive impulse can evolve await in the 4 of Coins.