Paulina Cassidy’s second deck has been described by some reviewers as “child-like,” an impression that is explicitly touted by the wording on the box, leading to the assumption that it is light-weight and not suitable for answering serious questions. This is an older deck, first published in 2011, that never caught my eye because my interest in tarot decks leans toward graphically clean rather than painterly artwork. My first thought on flipping through the store copy of the deck at the shop where I ultimately bought it is that while it is whimsical, occasionally to the point of being a bit twisted, and ever-so-slightly decadent in a late-Victorian way, it is anything but trivial. I’ve always resisted gauzy watercolors of flitting fairies, but here the few winged creatures that make an appearance look decidedly bedraggled, like they got a good soaking and never quite dried out. Many of them appear slightly addled and borderline deviant, suggestive of Edward Gorey or Gahan Wilson cartoon characters (or how about “Chucky” of the Child’s Play movies?).  Most have loopy expressions, like their heads are stuffed with straw, but a few sport a faintly wicked gleam in their eyes. To me, this adds immensely to their peculiar charm.

Except for the poses and the presence of suit symbols, the cards are not all that reminiscent of the Waite-Smith imagery, leaving the reader to pursue intuitive hints as to their meaning. However, it is certainly reasonable to simply import the RWS meanings and  apply them with a little creative panache. One reviewer contrasted their obvious “lightness of being” to the “heaviness” of the Thoth and Mary El decks, and I can see where she is coming from. But the fact that they are elusive doesn’t mean that they aren’t visceral. Just ignore their faintly goofy, starry-eyed  expressions and look at what they’re doing, which should ground them sufficiently for the purpose of any reading scenario.

I laid out a five-card line to ask how well the deck would work with my particular reading style.

The line is book-ended by the Ace of Cups and the Lovers, which together suggest emotional effusiveness and companionable rapport. This deck should be as comfortable as an old pair of slippers to work with once I’m tuned in to its quirky (and vaguely “smirky”) vibration. The Three of Wands at the center is a card of patient anticipation; waiting for the deck to yield its fruits will be well worth the time and trouble. The two Earth cards, Hermit (Virgo) and the Knight of Coins (Taurus), surrounding the Three of Wands are both reversed, implying that they will be frugal with their practical wisdom. It will have to be acquired through the tempered, meditative approach that is encouraged by the rest of the deck; no hitting them over the head and absconding with the goods. Fire and Earth are complementary elements that present a highly functional blend of enthusiasm and sobriety, so it’s unlikely that the deck will indulge in the prankish whimsy that might be assumed from its advance billing. My best bet will be to tone down my intense analytical rigor and let my readings simmer slowly in a sauce of inspiration, imagination and ingenuity until they release their full flavor and aroma. This will be a deck to savor, not to beat up on with intellectual gusto.

Last night I performed two highly informative Celtic Cross readings with this deck. The more interesting one was for a man who is considering trying to juggle two career paths, both of which involve doing the things he loves. One is his current job, which is secure but increasingly less rewarding, while the other is a start-up business that is already in the planning stages. Two or three cards really stood out. The 2 of Cups was the “covering” card; no Significator was used, so I just considered it the “environment of the question.” It showed that he is emotionally “betwixt and between” regarding his choices in the matter. The Queen of Cups was the “crossing” card, showing both challenges and opportunities; this is a “nurturing” Queen that implies a state of incubation, like a hen sitting on an egg that could hatch into either an “ugly duckling” or a “swan.” The prospect of spawning a “conjoined twin” (parallel careers) is less compelling because both would probably suffer for it.

The Ace of Swords was the “above” card, which I read as the Present. This is the “bright idea” card, showing that the start-up initiative has the upper hand in his assessment of the situation. In this context it could also mean “cutting ties.” The “behind” card (the Recent Past) was the 10 of Swords reversed and the “before” card (the Near Future) was the 5 of Wands reversed, both showing that the situation as it stands at work is not in a good place and won’t be any time soon (there is some backstabbing and in-fighting going on), while the 5 of Cups reversed in the “below” spot (the Foundation of the Matter) shows that he hasn’t been happy with this for quite a while.

The two cards in the “fears” and “querent’s environment” positions (Cards #7 and #8) were the 3 of Wands and the Knight of Cups, both of which were reversed. I’m thinking he may be giving his current employer too much of an opportunity to “reel him in” if independence is really what he wants. The 3 of Wands reversed looks like an excess of patience and the Knight of Cups reversed suggests being too accommodating; both of these cards convey a willingness to compromise.

The Queen of Wands in the “hopes” position (which I call “ambitions” since it implies active pursuit of the goal rather than simply wishing for it) indicates that he needs to be forthright and uncompromising (that is, stand firm and “take no crap”) in his approach to resolution. The High Priestess was the “outcome” card, which tells me that if he stays the course by emphatically assuming the aggressive stance of the Queen of Wands, he will “click into the channel” of a higher purpose.

What I found really intriguing is that the Ace of Swords in the Present and the High Priestess as the outcome remind me of the scene from The Merry Wives of Windsor where Pistol threatens Falstaff with robbery when the latter refuses to lend him money: “Why, then, the world’s mine oyster, which I with sword will open.” This combination of cards clearly shows that mental clarity and acuity hold the key to opening the “treasure house” concealed by the High Priestess. He needs to keep his wits about him (Ace of Swords), remain determined (Queen of Wands) and aim high (High Priestess). I told him I like his chances of making a go of the start-up, while staying where he is seems to offer little long-term satisfaction. 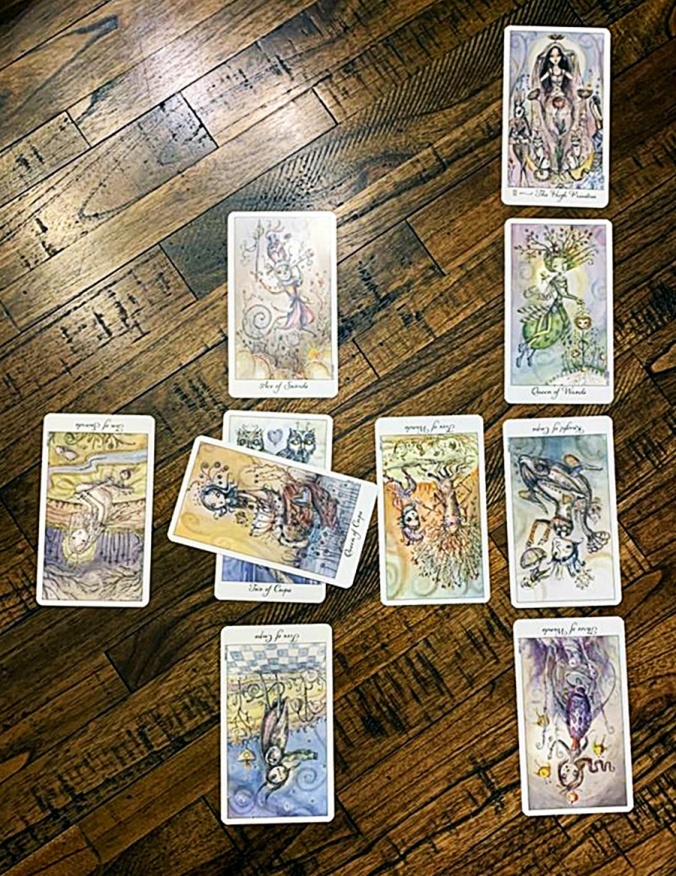 The striking thing about the woman’s reading (also work-related) was that all of the cards but two were reversed, showing the past, present and future turmoil that plagues her workplace. The only upright cards were the 8 of Wands in the “hopes/aspirations” position (in my Celtic Cross model, “fears” takes Position #7, similar to Eden Gray), and the Page of Swords in the “covering” position. This suggests that she is being unfairly scrutinized and criticized (Page of Swords) and should be prepared to “high-tail” it out of there (8 of Wands) on short notice, although a strategic retreat would be more dignified. Her “outcome” card was also the High Priestess, but it was reversed, showing that triggering the 8 of Wands would amount to a leap of faith into a doubly unknown future. They are a couple, so both of them getting the High Priestess could mean that they will be “on the same wavelength” and can help one another to transition into a better place. 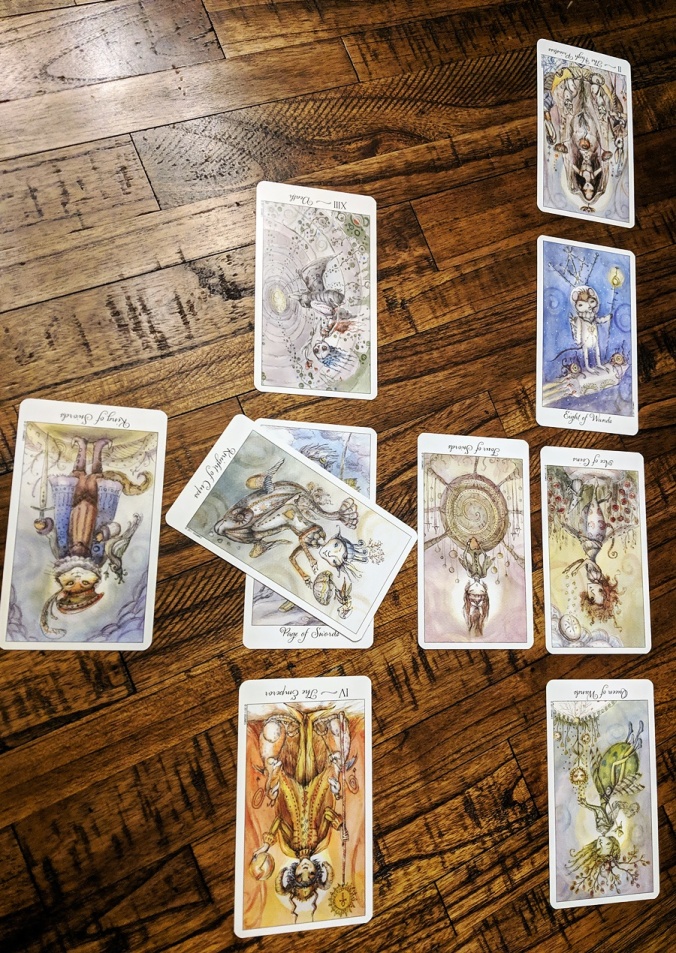