UPDATE: The subject of this reading, Brandon Chicklis was recently found dead off the side of a road in Rindge, NH. His death has been ruled a homicide but no other information was provided.

This post begins with a lengthy preamble reflecting on the nature of my self-created missing-person spread and the decks I’ve found to be best suited for its execution. The spread design has always assumed that the subject of the reading is in dire straits and has somehow been kept from public view, usually but not always contrary to their own wishes. Many of these people are too young to be firmly in control of their own destiny and lack the resources to establish themselves independently in the larger world, much less cover their tracks; the obvious conclusion is that they had adult “help.” The assumption is especially relevant in “cold cases” that have remained unsolved for an extended period of time, since people who drop out of sight voluntarily to make a new life may eventually re-establish contact or leave some kind of trail leading to their discovery. Nationwide electronic data networks make it harder than ever to remain invisible by choice, so the twin specters of coercion and self-inflicted demise typically enter the picture. I’ve tried numerous decks for these readings, and have found that those with a deeper philosophical or esoteric slant usually provide a sharper and more detailed view of the situation. These are not necessarily “dark” decks, although it is tempting to use those, since they tend to photograph poorly due to their visual bleakness.

Last night I attempted three times to throw the present layout, using three different decks, but the cards seemed to be conspiring against me. In the first attempt, I neglected to remove one of the two promotional cards from the deck before shuffling, which threw off the sequence; in the second, some of the cards stuck together to the same effect; and the third time I used a deck that was entirely too sunny for the grim reality that commonly attends these scenarios. This morning I tried again with the Liber T: Tarot of Stars Eternal, and came up with something I could work with. Because of my long association with the Thoth deck, this vivid reinterpretation of the Crowley/Harris masterpiece performs perfectly for me.

This is a more recent case from Massachusetts with connections to southern New Hampshire, not too far from where I live. Most of my investigations center on missing-person notices in the local newspapers, which I can easily monitor for developments over time.

At 20 years old, this individual is on the cusp of adulthood, so I used the Prince of Disks as the Significator, and the Liber T deck with reversals. As usual, the “Train to Nowhere” spread was my tool of choice for this purpose.

The Significator turned up in the sixth position of the “train,” one I’ve taken to mean that the individual of interest is linked or “bound” to another person who may have predatory objectives; another outside possibility is that the trail leads to a city, which in this case would most likely be Boston or one of the larger New Hampshire urban areas. 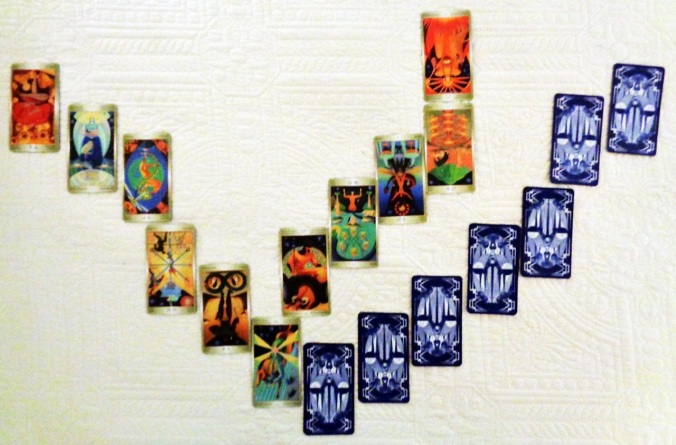 My original plan with this spread was to use the two cards adjacent to the Significator to fill in the details of the subject’s present circumstances, but the more I work with it the more I appreciate the value of all six cards of the sub-pack in telling the story, with the Significator’s position in the series suggesting how self-willed pertinent events may have been. The cards are dealt face-down and then turned over to search for the Significator, so the card physically on top of the pack before turning it becomes the primary “driver” of the conditions described in the rest of the chain.

Here that card is the Queen of Wands reversed, giving the impression that a disagreement of some kind with an imperious older woman in a position of authority (mother, boss, teacher, significant other, etc.) may have set things in motion. 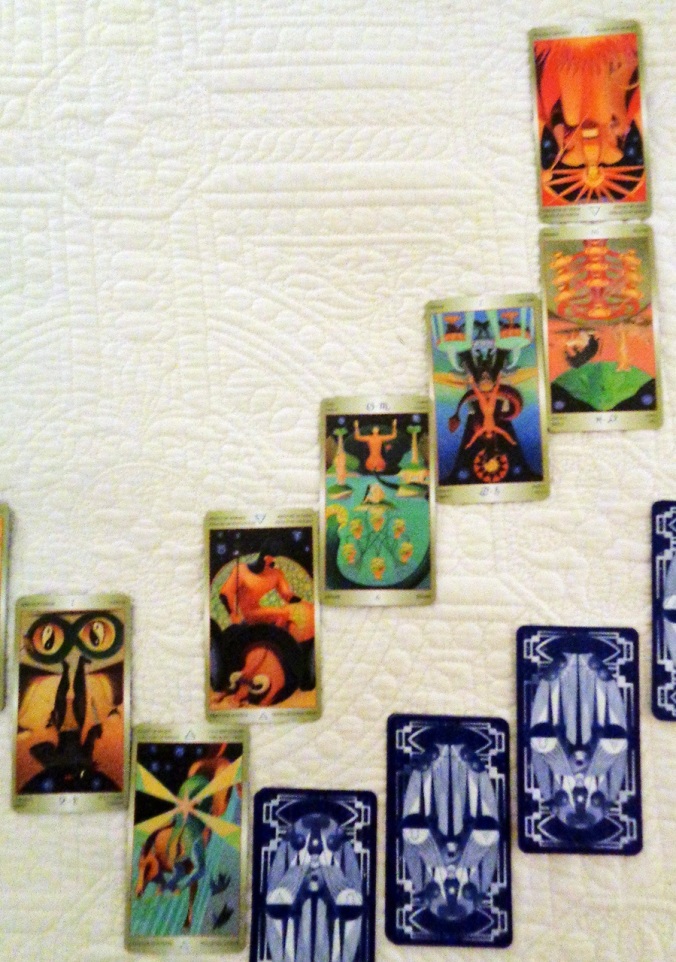 The Queen of Wands is followed by two reversed Cup cards – the Ten and the Two –  suggesting that intense emotional turmoil may have descended upon the subject as a result of the confrontation: maybe he was kicked out of his “happy home” or rejected by a lover. The 6 of Cups next in line and adjacent to the Prince of Disks makes me think he experienced some kind of epiphany regarding his emotional state that reinforced his desire to create some distance between himself and his antagonist. The arm position of the figure on the Six is almost a mirror image of the gesture appearing in the reversed 2 of Cups, perhaps indicating some kind of realization or revelation. At any rate, it looks like he got the doldrums behind him and found some kind of release. There is, however, another potentially darker answer; the three central Water cards bring to mind the lyrics of the old Ray Charles song “I’m Going Down to the River” (“I’m goin’ down to the river and drown myself”). But in that case the relevance of the concluding Knight of Swords becomes indeterminate.

The Knight of Swords leading away from the Significator strongly indicates that he hitched a ride somewhere with an older man, possibly into Boston. The card is upright, so there seems to be no implication of insidious intent. The Significator is also upright, showing that the subject is not literally “under ground” (but he might, as noted, be “under water”). If I were to guess, I would say he is hanging out somewhere on the streets of that city or another one in the region. The reading is silent on what may have befallen him there since that chapter of his story has yet to be written (at least as far as I know on June 30, 2018).

I will update this when more information emerges in the media.

One thought on “Where Is Brandon? – A Missing-Person Reading”