UPDATE: The remains of Austin Colson were found in a wooded area of northern Vermont not long ago, and positive identification has now been made. He died of a gunshot wound to the head.

My instincts were apparently sound in this case, although my reading wasn’t too accurate as a whole. There may very well have been drugs involved, a violent altercation (5 of Swords as well as the multiplicity of “Fives” in general) now seems relevant, and the Knight of Cups could be  showing the perpetrator (a displeased and possibly irate “partner in crime”). No charges have been filed yet, so there is more to come in this case.

A young man from Vermont recently went missing, apparently while traveling locally for work. I have a missing-person spread that I’ve used successfully in the past to analyze such cases, and decided to apply it to this one. I used the Rohrig Tarot, with reversals. This spread is designed around a “locomotive” motif where each “car” in the train suggests one possible location where the individual might be found, and his or her relative condition. Here is a link to my previous post for this spread.

Since he was described as dark-haired, small in stature and under 21, I chose the Page (Princess) of Pentacles as the Significator. This card turned up at the very top of the pile in the sixth position,  titled the “Lounge Car” and signifying both the possibility of sexual predation (being “used” for pleasure) and of being “in the city.” Although I randomized thoroughly for reversals, none of the cards in this pile appeared as reversed, thereby downplaying the potential influence of hidden factors (that is, no more intrigue than  usual for a potential kidnapping case). There were no cards bracketing the Significator, so I read the entire sub-pack of six cards. 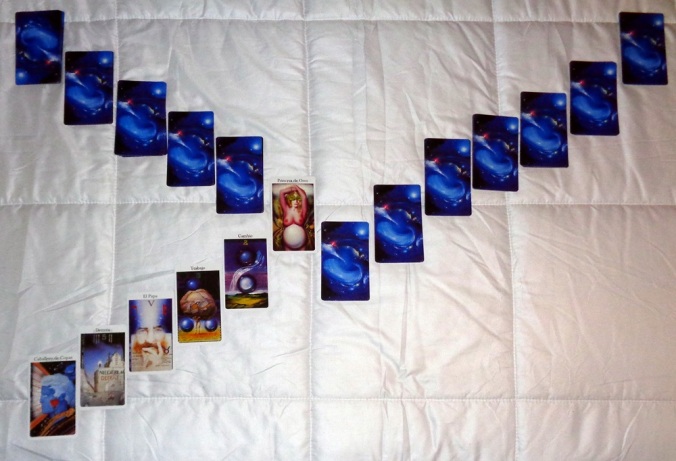 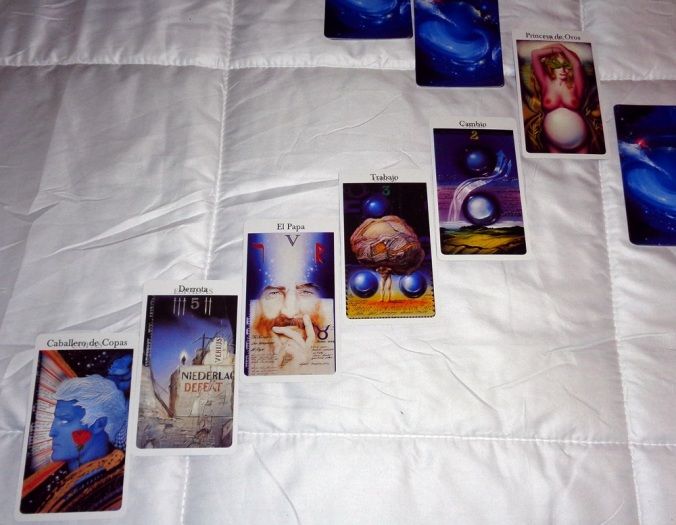 The cards of the Rohrig deck are particularly evocative and lend themselves readily to free-association from the images, producing insights that go beyond the limited range of the positional meanings. The Princess of Pentacles in this deck shows a surrealist’s vision of a hugely pregnant young woman, suggesting that  an expectant girlfriend may figure into the situation (he had been living with a girlfriend before his disappearance). The 2 of Pentacles and the 3 of Pentacles follow, reflecting that the young couple are trying to sort things out in a practical and constructive way. The next card is the Hierophant, sometimes seen as a card of marriage; the pair may have bolted together to do just that, but there has been no report of a missing female so it isn’t likely. The 5 of Swords, a disruptive and disheartening card, leads to the Knight of Cups, described in the Rohrig text as “a good and loving father,” possibly the girl’s father in this particular case.

It is notable that there are four repetitions of the number Five in this short reading: the 2 and 3 of Pentacles (which I see as working in tandem here) add to five, the Hierophant is numbered 5 (Roman numeral V), the 5 of Swords appears, and the number values of the Princess (11) and Knight (12) add to 23, which reduces numerologically to five.  This is an unbalanced and discordant number; I often think of it as a “can opener” or “nut-cracker” that rudely liberates the stalled momentum of the balanced but static Four. It illustrates the aphorism “You can’t make omelets without breaking eggs.” Rather than a marriage, some kind of violent altercation may be indicated, as exemplified by the 5 of Swords.

What is shaping up in this intuitive read (which may be more fanciful than factual) is a conflict scenario that pits the Page of Pentacles (which could represent either the young man or the couple) against the Knight of Cups, a displeased and possibly irate father. If, on the other hand,  some kind of sexual predation is in fact indicated and the young man has been abducted, the Knight of Cups could describe the perpetrator. In that case, the trail may lead to a metropolitan area. There could be a much simpler answer (an undiscovered accident, a clandestine suicide, a drug deal gone bad, etc), but I’m going to stay within the bounds of the reading and see where it goes. I will update when more is known about the disappearance,