Several years ago I spent a good deal of time learning and practicing the art of geomancy (literally, “Earth Divination”). The old texts specify that one is to use a wand to poke a random number of holes in a local patch of soil for each of the four main geomantic figures (the “Mother” figures) on which the entire chart is based. Whether the total number of holes was odd or even determined how each figure was to be constructed. (You obviously have to poke enough of them so you don’t remember what you did.) More modern practitioners used a “box of earth” that could be kept indoors, and still others used a bowl of small stones or objects – I assume they must be found locally – from which a random number of items was drawn by hand. Israel Regardie described the last method in The Complete Golden Dawn System of Magic, and it’s the one I’ve found to be the most practical. I used my daily walks over a couple of years to round up a large number of similarly-sized smooth stones to populate my “casting cauldron;” the idea is that a homogeneous group increases randomness because none stand out to the touch, saying “Pick me!” 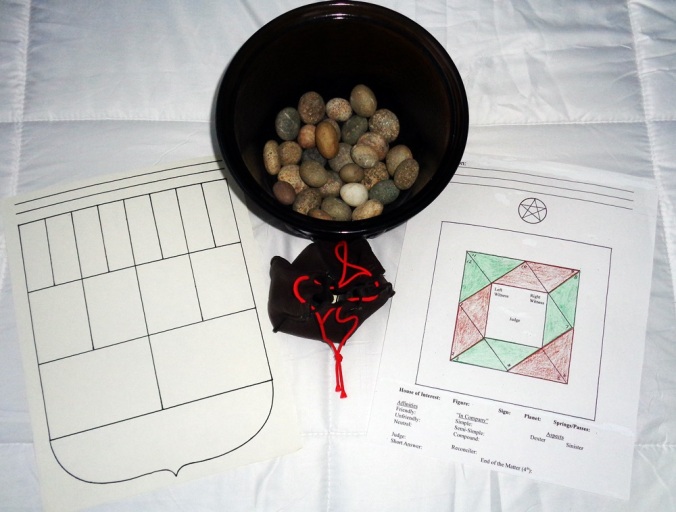 My early studies brought me to published sources such as Stephen Skinner’s The Oracle of Geomancy (whose bibliography was an invaluable resource), Aleister Crowley’s A Handbook of Geomancy (excerpted from his periodical, The Equinox), the Fourth Book of Occult Philosophy by Henry Cornelius Agrippa (although some say it’s actually by “the pseudo-Agrippa”), the aforementioned Regardie tome of Golden Dawn material, and several worthwhile internet sites. More recently I purchased John Michal Greer’s The Art and Practice of Geomancy, which renewed my interest in geomancy and inspired me to post the topic here.

I pretty much stayed with casting the main geomantic chart and populating a traditional square horoscope blank with the figures; there is a more complex range of interpretive steps – amply articulated in Greer’s text – that I didn’t explore at that time. I’ve just come to the conclusion that I should really expand my reach with geomancy. I’ve been having so much fun with various forms of cartomancy and horary astrology that I’ve been neglecting my “stones.” Consequently, I will be posting occasional updates on my progress here.