I once had a stimulating on-line conversation with Mary K. Greer about the “inner mechanics” of the Grand Tableau. I had just begun working with the distance,  or “near/far,” method promoted by Andy Boroveshengra, and was striving to connect that to the idea of “topical” cards for the major departments of life (love, work, family, finances, health, etc.) that can appear anywhere in the spread.  I realized early on that the GT, as a broad life-reading tool, can answer almost any conceivable question within a single layout using a multi-topic approach. My focus was on how the various topic cards interact within the dynamics of the overall reading, primarily through techniques like intersection, knighting, mirroring,  and house correlation. (The more elaborate practice of “chaining,” or house-counting, has yet to make an impression on me since I can invariably get my answers without going that far).

Examining the random distribution of topic cards and their close companions, I was struck by a vivid image of the overlapping circular ripples that appear on the surface of a pond when you toss a scattering of stones into it simultaneously. Some of the  expanding waves reinforce one another by moving in the same direction, some meet obliquely and create a new vector and still others clash and disperse, canceling out any cumulative effect. While the  impact in a GT isn’t quite that evident, this notion creates a useful analogy for interpretation. I bounced if off Mary and she agreed in principle. It offers an effective model for merging the influence of cards that do not share the “near” proximity wherein more pronounced interaction occurs. Another convincing analogy is that of an isometric map of a city: the topic cards resemble prominent skyscrapers and the connections between them act like city streets.

I realized that knighting provides the most dramatic way to pull together more distant cards. I found that – at least when the main focus card is away from the edges of the layout – it produces a symmetrical “knighting array” resembling a spider’s web. The more distant cards “pluck” at the outer strands of the web like trapped flies, thus being reeled in and brought under the sway of the central focus card. This created a third enticing image, that of the various topic cards as “vortices” (whirlpools) of force, like gravity wells in space that draw surrounding objects into their operational field.  It becomes especially interesting when the “satellite” cards of one topical array are shared by a neighboring array, acting something like covalent bonding in physics and giving the impression of a vigorous tug-of-war between competing aspects of life. (In the GT below, the Gentleman and the Lady both knight to the Letter and the Child, suggesting written communication between them, perhaps  about their offspring; maybe there is a custody battle brewing.) Taken as a group, they present a gestalt panorama that reminds me of a floral arrangement, with some “blossoms” more prominent than others within the overall pattern, as befits the context of the querent’s question(s). 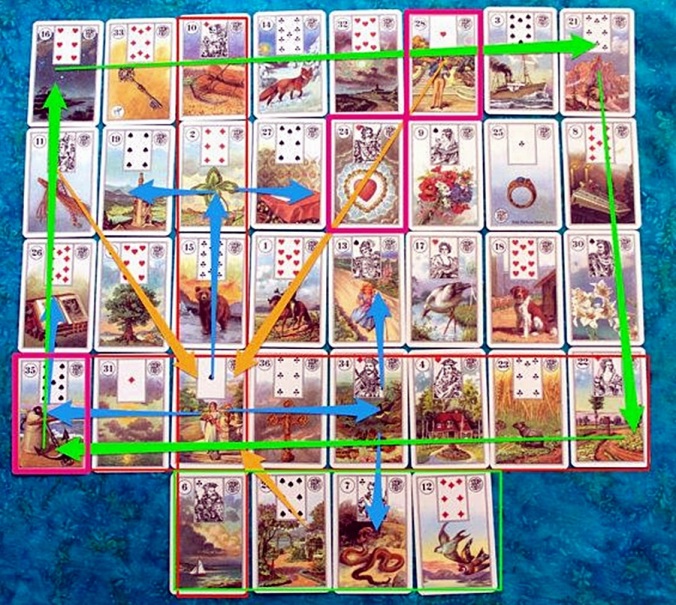 Intersection is another valuable technique that creates cooperative points of contact between non-adjacent topic cards by finding the common junctions on the rows, columns and diagonals radiating from each one. Depending on the degree of right-angle separation between any two cards in the layout, there will be both a vertical and a horizontal interchange that produces a “box-like” framework with internal knighting also possible, but non-adjacent cards in the same row or column can only intersect diagonally in a diamond array with no possibility of knighting between them, leaving considerations of proximity and mirroring as the main modes of linear synergistic analysis. This “boxing” creates a different type of pattern that looks more like Piet Mondrian’s painting “Broadway Boogie Woogie” than a spider-web.

Here is an illustrative example that includes four topic cards: the Gentleman, the Lady, the Tree and the Bear. 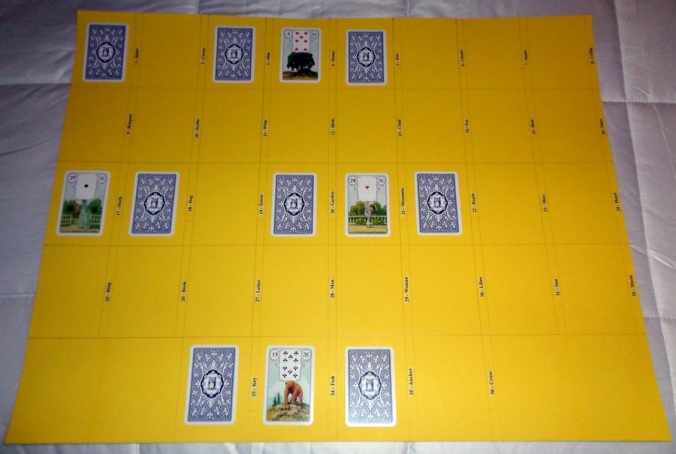 I find house correlation to be useful when cardinal topic cards and key ordinal cards reside in the houses associated with their counterparts, creating a commonality of focus and purpose. Unless the cards are linked by other relational means, however, I don’t pay much attention to house position; it’s a case of “too much information” when applied equally to all the cards in the spread.

Although these elements of combinative evaluation are decidedly secondary to the much more potent influence of close proximity, I often experience them as being in many ways more revealing than the comparative trade-offs that must be made when trying to conflate the meanings  of pairs and triplets in a more straightforward manner.

3 thoughts on “Ripples on a Pond”