Those who spend time on the tarot forums know that the most frequently asked questions in the reading exchanges, hands down, have to do with romance. Usually it’s some variation of “What does X think or feel about me?” disguising the real question: “Does X love me?” But sometimes it gets more to-the-point and visceral. Someone once asked “Does X want to have sex with me?” I decided to do a simple three-card line to see how that question might be answered. I used the Tarot of the Sevenfold Mystery, with reversals. 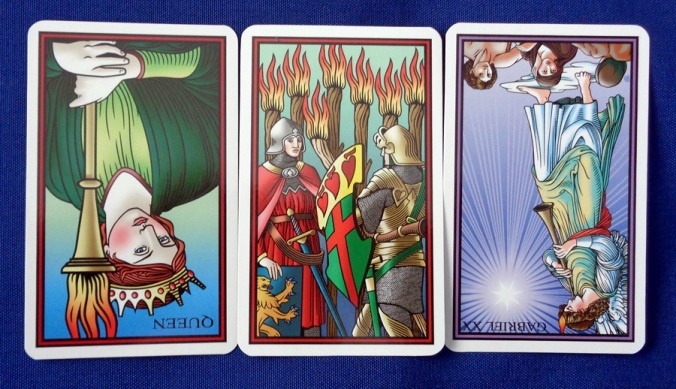 I’m using Robert Place’s “center destination” approach here rather than the past/present/future model, making the 7 of Wands the main thrust of the reading, although some elements of development over time are present. The two flanking cards feed their influence into the testimony offered by the middle card.

Queen of Wands reversed: There is a “banked fire” here. Something may be stirring but it is being suppressed. This Queen looks especially pensive, implying that she has given the proposition some thought. She is looking ahead somewhat apprehensively to the challenge posed by the 7 of Wands. Waite calls her “chaste, loving, honourable,” so there may be a question of infidelity.

7 of Wands: I often see this card, titled Valour in some decks and meaning “extraordinary courage in the face of daunting odds,” as showing the single combatant maintaining the “moral high ground.” Here, although hard-pressed, it seems to be holding the line against overwhelming temptation.

Judgment reversed: This card suggests that there may be subliminal religious overtones to the resistance. The target individual may have serious misgivings about the morality  of following through since casual – non-marital or extra-marital – sex contravenes most orthodox religious teachings. There may be some anxiety about potentially compromising “salvation” that stiffens the resolve of the 7 of Wands.

The bottom line here looks like a definite “No” since virtue carries the day, although not without some undermining urges in the opposite direction. My advice to the querent would be to go sniffing around elsewhere. Either that or play Billy Joel’s “Only the Good Die Young” for the reluctant love/lust interest and hope for the best.