This is a detailed study of a recent death-by-suicide using a method I’ve been developing for combining astrological and tarot techniques in horoscopic analysis. The event occurred following a family celebration; I was present at both the gathering and the scene of death. 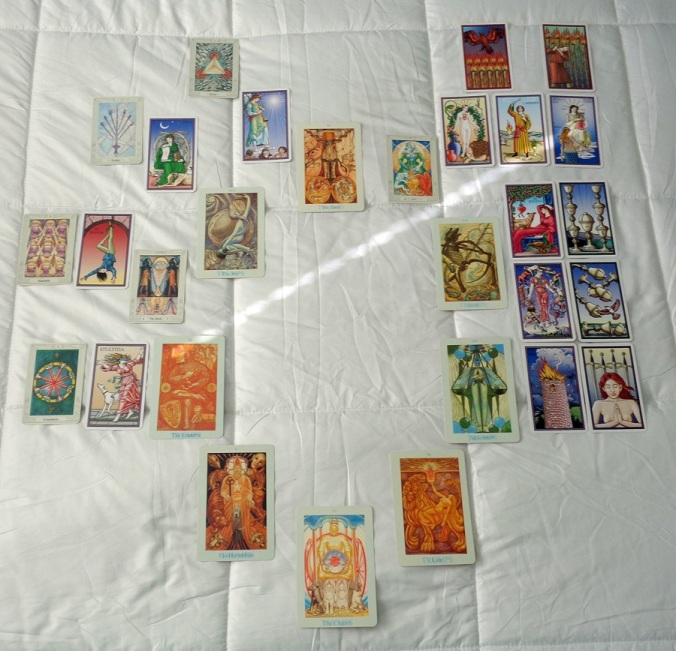 Here is the astro-tarot map for the transits at 10:00 PM on November 24, 2017, calculated for the location of death. I used the eight-segment “octile” house system. The inner ring of eight large cusp cards holds the zodiacal trumps associated with the signs on the four angular points of the individual’s natal horoscope, and the four intermediate signs on the midpoints between the four angles. The two smaller zodiacal trumps (Moon/Pisces and Temperance/Sagittarius) represent “intercepted” signs falling between the cusps that both contain planets. (For clarity, the natal planets were left out, but they are mentioned in the analysis where applicable.) The second ring of planetary trump cards shows the arrangement of the transiting planets, and the outer ring of minor cards identifies the Chaldean decans for the zodiacal degree of each planet, derived from the Golden Dawn system of correspondences.

The decan correspondences for the transiting planets are fascinating.

I’ll start with transiting Uranus in Aries in what I call the “Personal/Private” (Northeast) quadrant; it’s in the Aries-Taurus “octile.” He was determined (Aries/Emperor) to liberate himself and start over (Uranus/Fool) as a way to make an end to his troubles ( 4 of Wands, “Completion”). This and the Neptune-in-Pisces situation (see below) make me think he was intentionally “going home.”

Transiting Mars (opposed to transiting Uranus and square to transiting Pluto, all three making a Cardinal Grand Cross with natal Sun in Cancer) is in Libra in the “Social/Public” (Southwest) quadrant; it’s in the Libra-Scorpio “octile.” An important judgment or decision (Justice) led to a destructive episode (Tower), resulting in an end to struggle (4 of Swords, “Truce”). Since all of the transiting planets except Uranus are above the horizon, this was carried out in a public setting.

Transiting Jupiter (conjunct natal Pluto) is in Scorpio in the “Social/Public”quadrant; it’s also in the Libra-Scorpio “octile.” His deep disquiet (natal Pluto in Scorpio) was greatly exaggerated by the happy circumstances of the celebration (Wheel of Fortune/Jupiter), causing an emotional funk (5 of Cups, “Disappointment”).

Transiting Venus is in Scorpio in the “Social/Public” quadrant, and in the Libra-Scorpio “octile.” He achieved a benign form of  self-acceptance (Empress) by entering a kind of mystical trance-state (7 of Cups, “Debauch”). Some observers said he looked like he had already “checked out,” completely disengaged even though he was sitting with them at the table. I saw him walking across the room and told my wife he looked “like a ghost floating through the crowd.”

Transiting Sun, Mercury and Saturn are in Sagittarius (with Saturn approaching its natal degree – the “Saturn Return”) in the “Social/Public” quadrant, and in the Scorpio-Sagittarius “octile.” There is a suggestion that he was answering a “higher call” (Sagittarius). His sense of manifest destiny (Sun) was inflamed by an anxious urgency (8 of Wands, “Swiftness’), impelling him to leave the party early. His mental condition (Mercury/Magician) was one of resignation (10 of Wands, “Oppression”). His fate (Saturn/World) was sealed by a “blind force detached from its spiritual sources, Fire in its most destructive aspect” (10 of Wands, “Oppression,” coincidentally representing Saturn in Sagittarius).

Transiting Pluto is in Capricorn in the “Personal/Public” (Southeast, or “me-vs-the-world”) quadrant, and in the Capricorn-Aquarius “octile.” He was making a profound statement (Capricorn on the Midheaven) of his total renunciation (Pluto) of all social connections (including family, since we happened to be there at the time). In modern tarot, Pluto is associated with the “Last Judgement” card, repeating the idea of a “wake-up call,” this time from Gabriel’s trumpet. All he had remaining to accomplish was to “do the deed.” (3 of Disks, “Work”).

Transiting Moon is in Aquarius in the “Personal/Public” quadrant, in the Capricorn-Aquarius “octile,” He had withdrawn (High Priestess) from all hope (Star); attempts to reach him at an emotional level (Moon) would have been useless (7 of Swords, “Futility”).

Transiting Neptune is in Pisces (the sign of its modern rulership) in the “Personal/Public” quadrant. His distorted, delusional state of mind (Moon) drove him to sacrifice his life (Hanged Man) in the unconscious (Pisces intercepted) hope of finding his way to some kind of redemption (9 of Cups, “Happiness”). The Hanged Man at the end of the series seems to me to be hugely symbolic of what transpired. It represents not only a sacrifice but also an immersion in the waters of forgetfulness and renewal. I think he already had one foot in the next world for some time; being around so many obviously content, well-adjusted peers could have magnified his bitterness and pushed him over the brink.